2018 STUDENT SEND-OFF BEACH PARTY
What’s all the commotion? Hawkeyes are hitting the ocean! Join the Los Angeles IOWA Club for the Student Send-Off Beach Party, our summer beach party to celebrate area students departing for the University of Iowa. This is a free event to enjoy fun in the sun, and to connect with your fellow Hawkeyes.
ALL ARE INVITED: students, parents, families, friends, IOWA Club members, fans, and supporters of all things Hawkeye! The party’s happening on the Redondo Beach Pier, with easy access to the ocean if you want to take a dip.
DATE: Saturday, July 28, from noon until 3:00 p.m.
LOCATION: Barney’s Beanery Redondo Beach Pier
100 Fisherman’s Wharf
Redondo Beach, CA 90277
424.275.4820
For our party, we’ve reserved Barney’s outdoor patio—it literally overlooks the beach.
FOOD AND DRINKS: Free finger food buffet compliments of our LA Hawkeye partner Barney’s Beanery. For purchase: beverages and food from Barney’s menu.
PARKING: Pay parking is available in parking ramps and at street parking meters.
PLEASE RSVP: Send us an e-mail at laiowaclub@gmail.com to let us know you’re coming.
See you on July 28.

By lahawks on October 16, 2017 in Events, Fun, Gamewatch, Networking 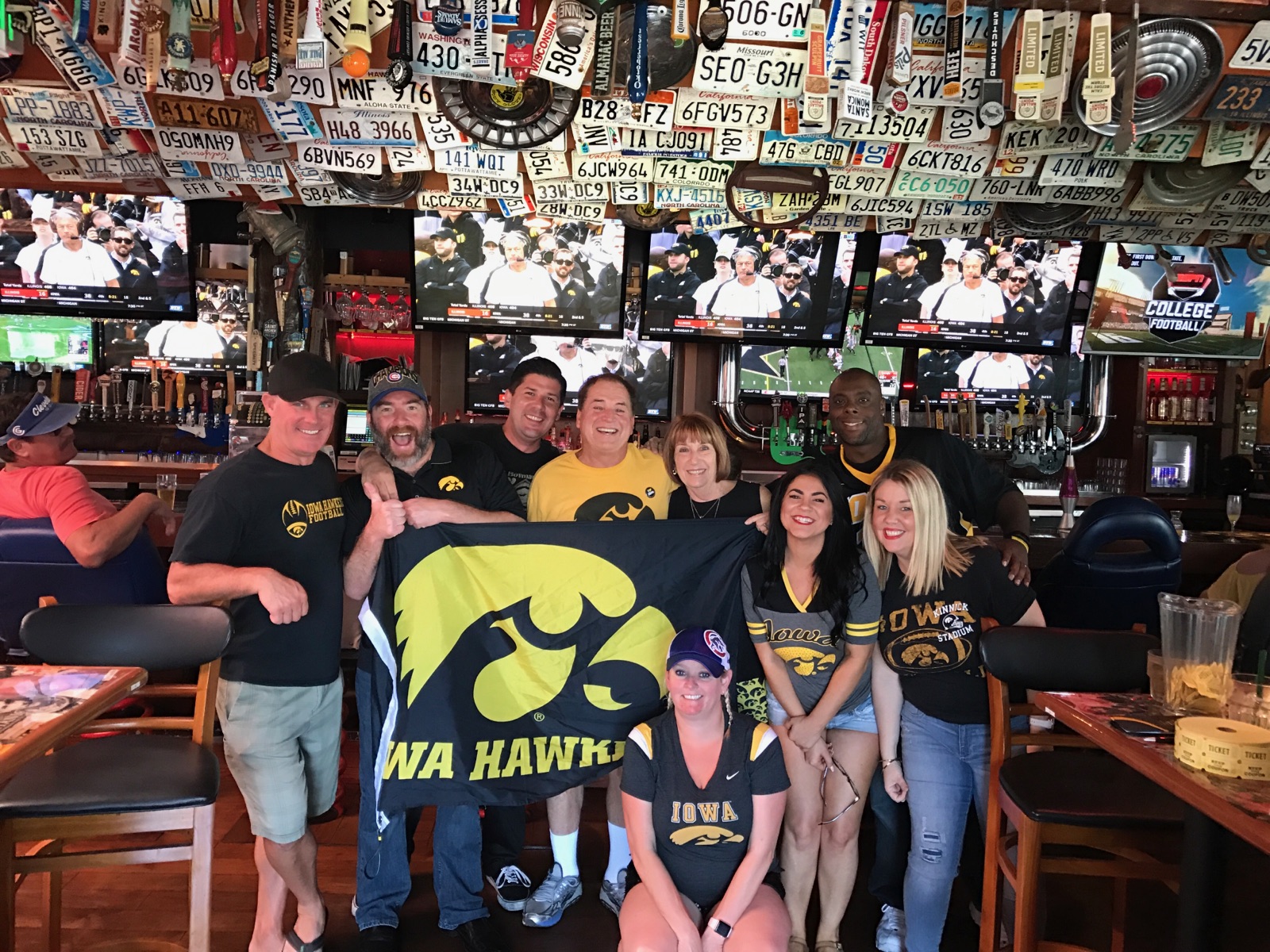 A NOTE FROM THE PRESIDENT
Long time no see Hawkeyes! A big thanks to Garrett Darland and the Redondo Beach LA Iowa Club members for hosting such a great venue and awesome time in the South Bay!  If you haven’t visited this location, do yourself a favor and head down the 405 and take in some Hawkeye football right on the ocean!

University of Iowa student Tanner Lafever is back with a look at the first half of action of the 2017 Hawkeye football season.

MIDSEASON REVIEW
So it was your first weekend this fall without Iowa football.

But it’s OK. You’re not alone. That empty space inside that you felt on Saturday is just temporary.

At least I think it is.

When is the next game again???

Anyway…our Hawkeyes (4-2) have made it to the halfway point of the 2017 season having run us through the emotional gamut as fans.

Remember when everybody picked Iowa to lose to Wyoming and its future NFL gunslinger in week one? Ah, good times.

And how about the scrap we had with our little sibling out west in Ames? That was pretty fun huh?

Sure we also experienced our share of heartbreak in consecutive one score defeats against Penn State and Michigan State, but it probably wouldn’t be a true Iowa football season without that adversity we’ve grown so accustomed to facing as Black & Gold supporters.

Six games down, six more to go. So why not take stock of where things stand as we cross the halfway mark?

My memory isn’t perfect, but I seem to recall preseason questions as to whether Iowa even had a quarterback capable of taking actual snaps in 2017 (for the record I was never worried about taking snaps, only throwing the football).

Captain Kirk ultimately elected to go with some Stanley kid, and wouldn’t you know it, things haven’t worked out half badly.

He hasn’t been perfect by any means (PLEASE STOP OVERTHROWING OPEN RECEIVERS DOWNFIELD NATHAN), but would you believe me if I told you that entering the bye week he was actually tied for eighth in the entire United States of freaking America in total touchdown passes?

In fact, Stanley’s 15 touchdowns through six games puts him on pace to break the all-time Iowa single season record held by that Chuck Long fella (27 TD’s in 1985).

Defensively, Iowa’s lovable criminal in the middle, Josey Jewell, paces the Big Ten conference in total tackles with 24 more than second place. The Outlaw’s 68 separate assaults on opposing ball carriers ranks third in the nation, and I’ve cherished every one of them.

The Hawkeyes have been led by their veterans, as is most often the case with a Kirk Ferentz team.

We mentioned Jewell above, and everybody knows that Akrum Wadley will be Akrum Wadley with the ball in his hands (tied for 11th nationally in total yards from scrimmage entering the weekend). But beyond the headliners, other upperclassmen have shown their worth both on and off the field as well.

From all-conference guard Sean Welsh opening up about his battle with depression, to safety Brandon Snyder’s miraculous return to a starting role less than six months after tearing his ACL, this team is full of great stories.

And as the older guys have shown them the way, the young pups have given Iowa a spark we rarely see in this renowned ‘developmental’ program.

Defensively, A.J. Epenesa has been everything we could have hoped for, and an opportunity given to sophomore safety Amani Hooker has turned into a breakout start to his young career.

On the other side of the ball, first or second year players have contributed over 700 yards rushing/receiving and nine touchdowns. Not included in those totals is first-year junior college transfer Nick Easley, who leads the team in every major statistical receiving category.

And if teenagers scoring touchdowns in an Iowa uniform wasn’t unusual enough, a peak at the offensive line last weekend revealed TWO freshmen starters at offensive tackle. It’s almost as if we’ve entered an alternative reality of Hawkeye football.

Next thing you know Kirk Ferentz’s squad is will be converting surprise onside kicks, fake punts and fake field goals.

Wait, what? They’ve already done that??

I just can’t make sense of the world anymore…

So there’s a look at the season in the rear-view mirror to this point.

The good has been great (LOL ISU), and the bad has been Trace McSorley on 4th and goal devastating. But we can handle it. As Hawkeye fans we’re built to withstand testing times while looking forward to the promise of the future.

We’ve got plenty of season left to play, so enjoy the week off and get ready to strap back in for a trip to Evanston Saturday.

Tanner Lafever is a senior at Iowa, majoring in Journalism and Mass Communications and a minor in Sports Studies.  Outside the classroom, Tanner’s always ready for a game of pickup basketball; so, don’t bring that weak stuff down his lane.  A jokester, movie buff and avid sports competitor; Tanner was born a Hawkeye; spending his childhood tailgating and attending Iowa football games his entire life.

Look for more stories from Tanner in the upcoming weeks, and if you would like to drop Tanner a line or two of support; email us at laiowaclub@gmail.com

Official 2017 Iowa Football Game Watches will only be in Santa Monica and Redondo Beach this season.  Many of you have enjoyed getting together at our Pasadena game watch location, but only Santa Monica and Redondo Beach will be honoring our 40% off food and drinks specials.  If this changes in the future, we’ll let you know; apologies for any inconveniences this causes.

Check out the fun and excitement at this year’s game watches. Wear your Hawkeye gear to get 40% off food and drinks during the game.

Santa Monica will once again be the featured Iowa Hawkeyes game watch location. We’ll continue with full sound for both top and lower areas, with the majority of TV’s tuned to our game.

RSVP on Facebook to let us know you’re coming!

Be sure to support the waitstaff at Barney’s, our terrific sponsor. Please tip on the full bill. We look forward to seeing everyone at the game watch.

If you’re interested in helping host the game watches (or volunteering with the club in other areas of need), please reply and let us know.

Come on out for the Student Send-Off Beach Party. It’s our summer beach party to celebrate area students heading off to UI this fall.

PARKING: Pay parking is available in parking ramps and at street parking meters.

Send us an e-mail at laiowaclub@gmail.com to let us know you’re coming.

What makes being a Hawkeye so special? Like they always say, “Once a Hawkeye, always a Hawkeye.” This marks our 3rd annual Student Send-Off.

Grab your friends and join the Big Ten Club for an evening of mingling, networking and Happy Hour fun at Sony.

Enjoy your first beverage on us and discount pricing for food and additional drinks. Studio Tours are also available at a special event price just for us.

Enter your e-mail address below, and you’ll receive invitations to club events